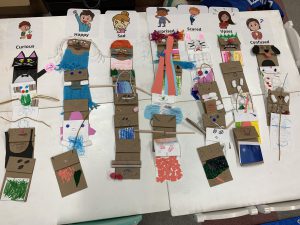 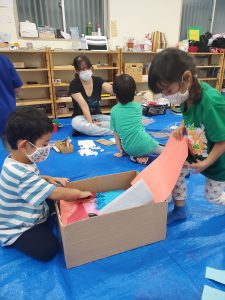 We started off the unit with a big art project of this Unit, making “feelings” puppets!

Using the Tinkering Box and one paper bag per feeling, everyone was tasked with creating our own feeling puppets.  Using only the Tinkering Box and looking at a few examples that the teacher created, we made our own puppets.  We tried to remember the upset eyebrows, or saw tears as we created our puppets  Some friends even created back stories for why their puppets are feeling the way they are.  For example, one friend said, “He’s upset because his Mommy said no donuts!” and another said, “He’s surprised because people found him (while playing hide and seek.)” 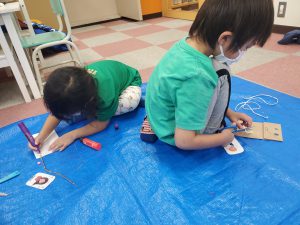 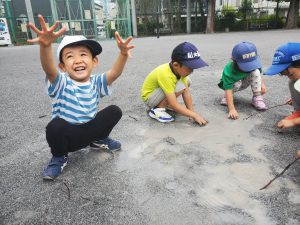 While playing basket ball, we saw some puddles on the ground. During PE, we kept staring at it and wanted to play with it, so after PE was over we ran over to play with it.  Instead of jumping in it, we put our hands into the mud and began playing with it.  We made some “mud dango,” “milk tea,” and “coffee.”  We also found some sticks and leaves, and decided to go “fishing,” together.  After fishing, we gave the “fish” to another friend, who then turned it into sushi. 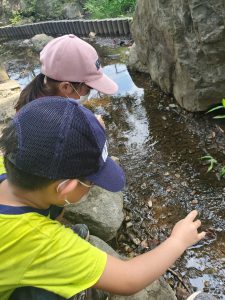 For our first outing day after the long break, we went to Heiwa no Mori Park.  This time, we went to the climbing equipment and pond at the park.  The climbing was challenging since it was very high up and there wasn’t anything to grip except for a rope.  We all managed to make it to the top, however, we soon found out that the real challenge was getting down.  When we were climbing up, we didn’t realize how tall the equipment was.  We had to get some help from the teachers to get down.

After climbing, we played in the forest area and pond.  We saw lots of tadpoles and bugs in the water.  We also found some trash in the pond.  We didn’t want the tadpoles to get stuck in the trash, so we searched for a long stick to pull the trash out of the water.  Our hands were a little short and we almost fell into the water, so we had to get some help from the teachers.  In the end, we pulled out two long strings, one water bottle, and a plastic bag from the pong, which we promptly threw away at the first garbage can we saw.  “Trash goes in the trash,” as one of our friends said.

Unit 3: “Life is But a Stage” Course Outline

Unit 3: “Life is But a Stage” – Week 1 Spotlight: Nature Camp
Comments are closed.