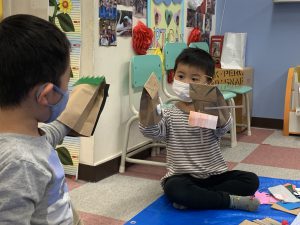 Our big project this week has been decorating and designing a beautiful puppet theater for our puppets to perform in! 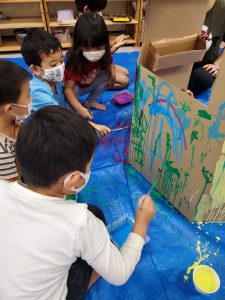 We started first with a cardboard box, then we added a layer of paint and pretty soon it was barely recognizable as a cardboard box!  Some of us wanted to make “rainbows” and more abstract designs, while others were very firm that they wanted “stripes,” so we decided to separate the theatre into the strips and rainbow sections.  We had so much fun that some of us ended up with paint on our clothes and hair.  Others got it on their hands and feet.  We really enjoyed painting with various styles.  While some of us kept to the usual paint brushes, others used their hands.  Some of us started dripping paint down the sides of the cardboard box.  It was all stylistic with no input from the teachers.

When the paint was dried we wanted to add a little more spazz to the theater.  We went into the tinkering box and found some things we could decorate the theater with.  Since we couldn’t use the glue stick for many of the decorations and we were low on wet glue, we had to take turns using the glue.  It helped us practice our patience, but also helped us really plan where we were going to put our decorations instead of just placing it anywhere.  We used lots of ribbons, pom-poms, and googly eyes. 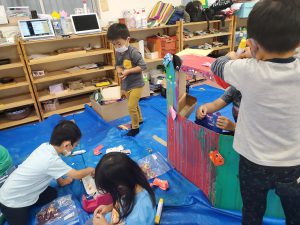 When the theater was done we took our puppets from the week before and began our own performances.  We started first with a “hide-and-seek” theme story, which a teacher modeled.  We then had to make our own renditions of the “hide-and-seek” story.  We all did amazing and were able to stick to the storyline without much differences from the teacher’s version to their own.  However, some of us did get creative and break the third-wall and leave the theater and include the audience in their renditions.

The next day we tried performing again, this time we used the “scared” and “happy” puppets to show us how they felt going down the wet slides in the rain.  The teacher modeled about how going down the slide the first time makes us “scared” and then seeing how fun and “happy” it is after going down many more times.  We all put our own unique spins on the concept since we each had different emotions about wet slides.  Also, after breaking the third-wall the day before, most of us started to ask our friends for help in our plays, making it a more interactive experience! 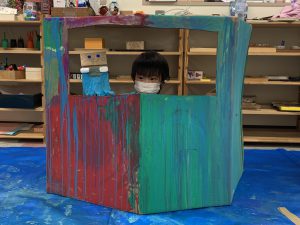 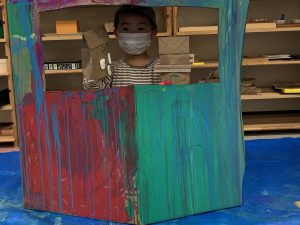 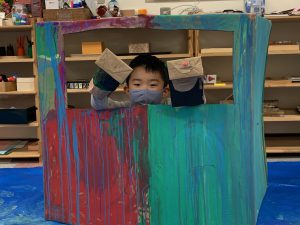 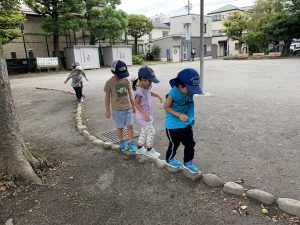 While at the park we have taken a liking to “Ninja Training.”  This is when we follow the teacher and challenge ourselves to do things at are a little difficult to do.  The training can be as simple as balancing on odd objects like tree stumps to rocks, and can be as difficult as attempting the Tarzan/zip line.  The teacher usually gives us the ninja training obstacles, but lately we have taken a liking to it so much that we started our own ninja training without the teacher.  We know what is challenging for us, so we have started to challenge ourselves in play. 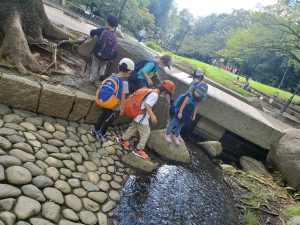 For Outing Day this week, we walked all the way to Higashi-Koenji and Sanshi-no-Mori Park! As expected it was no problem for us!

At the park, we played “tentacle monster.”  We chased each other around as the “tentacle monster” before trying out the apparatus.  There was one slide that was a challenge for us, since it was pretty scary.  But, after some help from the teachers we were able to slide down.

After lunch, we decided to take a small walk around the rest of the park which had a beautiful waterfall and pond.  The pond had so many beautiful koi fishes and ducks.  We were especially excited about the gold carp, proclaiming, “Look gold!  Good luck!”

We were also very excited to spot some baby ducks and tiny baby carp as well.  We wanted to feed them, but no one had fish food or duck food.  “We can’t give them human food.” 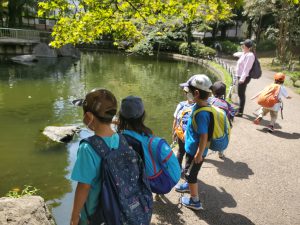